It is argued that the Möbius band provides a readily accessible conceptual visual metaphor for dual-aspect monism à la Pauli-Jung (a profound perspective on the interrelation between physics and psychology). The ‘Pauli-Jung conjecture‘ is particularly relevant in the context of modern neuroscience as most contemporary neuroscientists stipulate prima facie that the brain produces consciousness. However, this perspective is not conclusively corroborated by empirical evidence and cutting-edge findings in the domain of experimental quantum physics challenge its validity. The monistic dual-aspect perspective provides a parsimonious & elegant alternative perspective on the mind-body problem and the hard problem of consciousness (viz., the production problem). The semantic symbolism of the Möbius band is particularly interesting from an embodied and grounded cognition perspective. Specifically, Lakoff’s influential conceptual metaphor theory provides an explanatory framework which highlights the importance of metaphorical thinking, i.e., metaphors lie at the very core of human cognition and structure all of human thought at the most fundamental neuronal/cognitive level (e.g., via neuronal Hebbian mechanisms of long-term potentiation which are primarily established in the Piagetian sensorimotor-phase of human development). Besides its theoretical scientific relevance pertaining to fundamental questions concerning epistemology and ontology the non-dual (Sanskrit: अद्वैत, Advaita) perspective has important and far-reaching moral and ethical ramifications which are crucial in the context of the critically endangered survival of the species Homō sapiēns sapiēns on the ‘Earth System’. This presentation will also discuss my own experimental research in the domain of psychophysics (analysed using a posteriori Bayesian parameter estimation via Markov chain Monte Carlo simulations). Furthermore, an algorithmic digital 3D artwork of a Möbius band will be presented to visually illustrate the dual-aspect approach (the artwork is virtually positioned in front of the campus of the University of Plymouth). A custom-made website which can be found under the following URL provides additional information for those who are fascinated by this epistemologically challenging psychophysical topic: http://dual-aspect-monism.cf

"The general problem of the relation between psyche and physis, between inside and outside, can hardly be regarded as solved by the term “psychophysical parallelism”advanced in the last century. Yet, perhaps, modern science has brought us closer to a more satisfying conception of this relationship, as it has established the notion of complementarity within physics. It would be most satisfactory if physis and psyche could be conceived as complementary aspects of the same reality." (Pauli, 1952)

Figure it out
Algorithmic digital artwork depicting a virtual Möbius band in front of the Roland Levinski Building of the University of Plymouth. The Möbius band can be interpreted as a conceptual visual metaphor for dual-aspect à la Pauli-Jung (viz., mind & matter are not separate entities but complementary aspects in the quantum-physical sense).

The general problem of the relation between psyche and physis, between inside andoutside, can hardly be regarded as solved by the term “psychophysical parallelism”advanced in the last century. Yet, perhaps, modern science has brought us closer toa more satisfying conception of this relationship, as it has established the notion ofcomplementaritywithin physics. It would be most satisfactory if physis and psychecould be conceived as complementary aspects of the same reality. (Pauli, 1952) 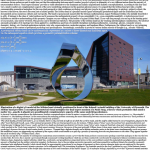 Display as image in a lightbox

“Dual-aspect monism and neutral monism offer interesting alternatives to mainstream positions concerning the mind-matter problem. both assume a domain underlying the mind-matter distinction, but they also differ in definitive ways. in the twentieth century, variants of both positions have been advanced by a number of protagonists. one of these variants, the dual-aspect monism due towolfgang pauli and carl gustav jung, will be described and commented on in detail. as a unique feature in the pauli-jung conception, the duality of mental and material aspects is specified in terms of a complementarity. this sounds innocent, but entails a number of peculiarities distinguishing their conjecture from other approaches.”
Barsalou, L. W.. (1999). Perceptual symbol systems.. The Behavioral and Brain Sciences, 22(4), 577-609; discussion 610–60.

“Prior to the twentieth century, theories of knowledge were inherently perceptual. since then, developments in logic, statistics, and programming languages have inspired amodal theories that rest on principles fundamentally different from those underlying perception. in addition, perceptual approaches have become widely viewed as untenable because they are assumed to implement recording systems, not conceptual systems. a perceptual theory of knowledge is developed here in the context of current cognitive science and neuroscience. during perceptual experience, association areas in the brain capture bottom-up patterns of activation in sensory-motor areas. later, in a top-down manner, association areas partially reactivate sensory-motor areas to implement perceptual symbols. the storage and reactivation of perceptual symbols operates at the level of perceptual components–not at the level of holistic perceptual experiences. through the use of selective attention, schematic representations of perceptual components are extracted from experience and stored in memory (e.g., individual memories of green, purr, hot). as memories of the same component become organized around a common frame, they implement a simulator that produces limitless simulations of the component (e.g., simulations of purr). not only do such simulators develop for aspects of sensory experience, they also develop for aspects of proprioception (e.g., lift, run) and introspection (e.g., compare, memory, happy, hungry). once established, these simulators implement a basic conceptual system that represents types, supports categorization, and produces categorical inferences. these simulators further support productivity, propositions, and abstract concepts, thereby implementing a fully functional conceptual system. productivity results from integrating simulators combinatorially and recursively to produce complex simulations. propositions result from binding simulators to perceived individuals to represent type-token relations. abstract concepts are grounded in complex simulations of combined physical and introspective events. thus, a perceptual theory of knowledge can implement a fully functional conceptual system while avoiding problems associated with amodal symbol systems. implications for cognition, neuroscience, evolution, development, and artificial intelligence are explored.”
Gibbs, R. W.. (1996). Why many concepts are metaphorical. Cognition, 61(3), 309–319.

“The study of concepts in psychology has historically had little to say about the possible influence of metaphor on mental representation. this silence is not terribly surprising given the long-standing view that metaphor is an ornamental, even deviant, form of language bearing no relation to how people actually conceptualize of objects, individuals, events, and abstract ideas. but in the last 20 years there has been an explosion of research in cognitive science on metaphor and related topics. a significant part of this research, most notably studies from cognitive linguistics and psycholinguistics, suggests that metaphor is not merely a figure of speech, but is a specific mental mapping that influences a good deal of how people think, reason, and imagine in everyday life (gibbs, 1994; johnson, 1987, 1993; lakoff and johnson, 1980; lakoff, 1987; lakoff and turner, 1989; sweetser, 1990; turner, 1991). one of the most provocative claims of this work is that many concepts, especially abstract ones, are structured and mentally represented in terms of metaphor. in his paper ‘on metaphoric representation,’ gregory murphy argues that metaphor might only have a limited role in the acquisition and representation of many concepts. he suggests that a theory of structural similarity provides a more satisfactory account of the linguistic and psychological data, thus greatly reducing, or eliminating, the need for metaphorical concepts. murphy deserves credit for raising important questions about the possible role of metaphor in a psychological theory of conceptual structure. however, murphy misunderstands aspects of the evidence for metaphorical concepts, accepts unquestionably certain assumptions about what a psychological theory of concepts must be like, and ignores the role of human embodiment in theories of metaphor, all leading him to underestimate the significance of cognitive linguistic and psycholinguistic work on metaphorical thought. space limitations prevent me from commenting in this reply on all of murphy’s arguments, but i”
Lakoff, G.. (2014). Mapping the brain’s metaphor circuitry: metaphorical thought in everyday reason.. Frontiers in Human Neuroscience, 8, 958.

“An overview of the basics of metaphorical thought and language from the perspective of neurocognition, the integrated interdisciplinary study of how conceptual thought and language work in the brain. the paper outlines a theory of metaphor circuitry and discusses how everyday reason makes use of embodied metaphor circuitry.”
Conference program
ARE 2019 Draft Programme

The most exciting phrase to hear in science, the one that heralds new discoveries, is not ‘Eureka!’ but ‘That’s funny…’