A strip of wet cloth, four angulas wide (3″) and fifteen hands (1¼ metres) in length, is stoutly swallowed and, then taken out, as instructed by the guru. This is known as dhauti.
~ Hatha Yoga Pradipika 2.24 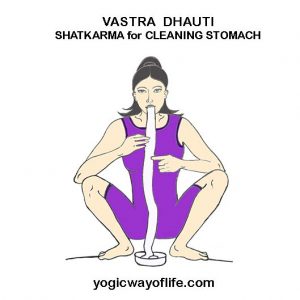 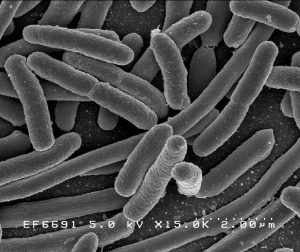 Escherichia coli, one of the many species of bacteria present in the human gut.

Vastra is Sanskrit for “cloth” and dhauti means “washing”. It is a yogic technique designed to cleanse the inner body, specifically the GI tract. It is one of several types of purifying dhauti methods in which a long strip of cotton cloth is ingested and then pulled out to cleans and detoxify the intestines. Given the fact that our environments contain countless (chemical) toxins which are responsible for various “pathologies of civilisation”  it is important to explore and practice methods to detoxify the organism effectively. It would be very interesting to quantitatively investigate the effects of dhauti on the intestinal microbiome (e.g., dysbiosis).

Studies (see below) which focus specifically on the relationship between the gut flora and neuropsychiatric abnormalities indicate that germ-free rodents display an exaggerated HPA response to stress compared to experimental controls. The studie of the relationship between the gut flora and the brain (via the gut-brain axis) could be termed “psychobiotics”. Currently studies with humans which quantify differences between people with various psychiatric/neurological differences and changes in the gut flora microbiome in response to stress are being conducted in several laboratories. The exact nature of various possible feedback loops in the gut-brain axis remains to be elucidated and is an important topic of interdisciplinary research.

Display abstract
Mammals live in a co-evolutionary association with the plethora of microorganisms that reside at a variety of tissue microenvironments. The microbiome represents the collective genomes of these co-existing microorganisms, which is shaped by host factors such as genetics and nutrients but in turn is able to influence host biology in health and disease. Niche-specific microbiome, prominently the gut microbiome, has the capacity to effect both local and distal sites within the host. The gut microbiome has played a crucial role in the bidirectional gut-brain axis that integrates the gut and central nervous system (CNS) activities, and thus the concept of microbiome-gut-brain axis is emerging. Studies are revealing how diverse forms of neuro-immune and neuro-psychiatric disorders are correlated with or modulated by variations of microbiome, microbiota-derived products and exogenous antibiotics and probiotics. The microbiome poises the peripheral immune homeostasis and predisposes host susceptibility to CNS autoimmune diseases such as multiple sclerosis. Neural, endocrine and metabolic mechanisms are also critical mediators of the microbiome-CNS signaling, which are more involved in neuro-psychiatric disorders such as autism, depression, anxiety, stress. Research on the role of microbiome in CNS disorders deepens our academic knowledge about host-microbiome commensalism in central regulation and in practicality, holds conceivable promise for developing novel prognostic and therapeutic avenues for CNS disorders.

“Vastra dhauti, which could be viewed as a ‘Sham feeding’ technique and mechanically stimulating the oesophagus and the stomach wall was found to have almost similar action in respect of gastric acid secretion when compared to 7% alcohol, the standard test meal which essentially acts has a chemical stimulant and has caloric value. more number of subjects showed regurgitation of bile and mucus in gastric samples after vastra dhauti while the incidence of blood was higher with the alcohol test meal even though the possibility of mechanical injury to mucus membrane was more with vastra dhauti.”
Swami Kuvalayananda. (1926). X-ray experiment on dhauti (Uddiyana). Yoga Mimamsa

“The following observations were made during uddiyana with vastra dhauti coated with barium meal being present in the stomach. 1) during uddiyana stomach rises very high due to being pushed up by the intestines in the abdominal cavity while the diaphragm rises higher still. 2) diaphragmatic movement is independent of the stomach movement. 3) stomach gets relieved from the normal pressure of the diaphragm.”

Anthropology demands the open-mindedness with which one must look and listen, record in astonishment and wonder that which one would not have been able to guess.