A CT scan providing evidence of the nasal cycle. The more patent airway is on the right of the image; the swollen turbinates congesting the left.

The nasal cycle is unknown to many people. It refers to the alternating partial congestion and decongestion of the nasal cavities in primates. It is a visible physiological congestion of the nasal conchae (nasal turbinates) due to selective lateralised activation of one half of the autonomic nervous system by the hypothalamus (cf. hemispheric lateralisation). It completly unrelated to pathological nasal congestion and is comparable to the circadian rhythm (in the broadest sense). The ancient yoga literature describes the nasal cycle in detail and it is the focus of several pranayama (breathing) techniques which have the goal to balance the nervous system/brain. The German physician Richard Kayser described it first in 1895. 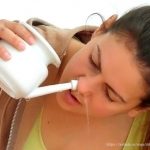 Jala Netī is a yogic cleansing technique (one of the shatkarmas; षटकर्म) to clean the sinuses. It facilitates the unobstructed passage of air for pranayama exercises and it creates a clear mind.