This is an excerpt form my PhD dissertation which can be accessed under the following URL: http://phd-thesis.ga

Preregistration is the practice of publishing the methodology of experiments before they begin. This strategy reduces problems stemming from publication bias and selective reporting of results. See for example:

A exemplary list of currently preregistered studies can be found on Zotero: https://www.zotero.org/groups/479248/osf/items/collectionKey/KEJP68G9 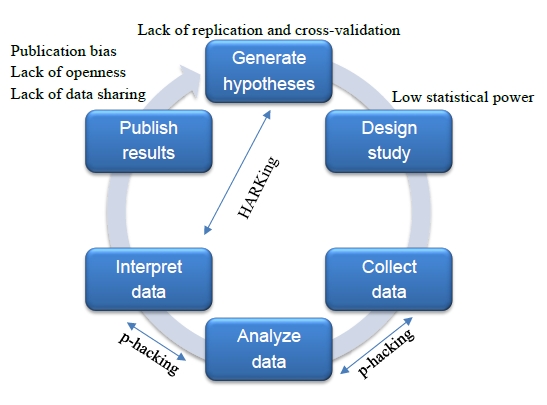 In addition to systemic and psychological interventions which change the extrinsic reinforcement schedule of academia and facilitate intrinsic motivation and altruistic behaviour, we suggest that various Bayesian methods can be successfully combined with preregistration210 of studies (C. Chambers, 2013, 2014; McCarron & Chambers, 2015), a proposal which has previously been formulated in the context of “neuroadaptive Bayesian optimization and hypothesis testing” (see Lorenz, Hampshire, & Leech, 2017). Preregistration is a novel publishing initiative and provides an important procedure that fosters transparency of research, mitigates publication bias, and enhances the reproducibility of research results because researcher specify their research strategies and planned hypothesis tests a priori before the research results are disseminated which enhances trust in the research conclusions. That is, the underlying motivation for conducting the study is explicitly disclosed prior to the analysis of the data which counters illegitimate HARKing (HARK is a backronym for “Hypothesizing After the Results are Known”) (Kerr, 1998) and the use of (unfortunately) pervasive data mining techniques like a posteriori p-hacking as discussed earlier (i.e., data dredging, data fishing, data snooping) (Head, Holman, Lanfear, Kahn, & Jennions, 2015; Simonsohn, 2014; Simonsohn, Nelson, & Simmons, 2014; Veresoglou, 2015).
An excellent article on the topic published in AIMS NEUROSCIENCE is titled “Instead of ‘playing the game’ it is time to change the rules”. The recommended article is freely available under the appended URL.211 It is self-evident that such opportunist research/analysis strategies as HARKing and p-hacking seriously compromise the evolution, progress, veracity, and trustworthiness of science. Preregistration thus prevents illegitimate post-hoc hypothesis testing procedures because hypotheses, methods, and analysis protocols are prespecified prior to conducting the study. Another key advantage of preregistration is that it enhances the quality of research due to an initial external review of the research methodology (there are alternative preregistration models which do not employ a review process (but see van ’t Veer & Giner-Sorolla 2016)). Preregistration is a measure which attenuates the problem of publication bias because information concerning statistically non-significant experiments becomes available to the research community and can be utilised for meta-analytical research purposes. That is, negative scientific results that are compatible with the null-hypothesis can be published (after peer reviewed quality checks are met) without regard to an arbitrary statistical significance threshold. However, it should be noted that preregistration is not appropriate for purely exploratory research (e.g., exploratory factor analysis using structural equation modelling, etc.), i.e., exploratory and confirmatory analyses are complementary. Most statistical methods are only valid for confirmatory research and are not designed for exploratory research and researchers should therefore commit to a specific analytic technique prior to consulting the data. With preregistration this crucial commitment is made before the data is collected. A procedure which clearly enhances the credibility of research. In the same vein, it has been argued that a stronger focus on confirmatory analyses reduces the “fairy tale factor” in scientific research (E. J. Wagenmakers, Wetzels, Borsboom, van der Maas, & Kievit, 2012). Hence, whenever a researcher wants to test prespecified hypotheses/predictions preregistration is a highly recommended approach to enhance the reliability,validity, veracity, and hence credibility of scientific research. Preregistration is crucial in order to be able to demarcate “hypothesis testing” from “hypothesis generation”, i.e., the oftentimes blurry distinction between prediction versus postdiction.
In the psychological literature on reasoning and decision-making “hindsight bias” is a widely studied phenomenon (Christensen-Szalanski & Willham, 1991; Hertwig, Gigerenzer, & Hoffrage, 1997; Hoffrage et al., 2011; Pohl, 2007; Pohl, Bender, & Lachmann, 2002; Roese & Vohs, 2012). Researchers are not immune to this ubiquitous automatic cognitive bias (a System 1 process, to employ dual-systems terminology). Consequently, it also applies to inferential decision-making in various statistical research scenarios. Explicit awareness of the hindsight-bias (and multifarious other cognitive biases which compromise reasoning) is thus of pivotal importance. Consequently, researcher should be educated about the general internal workings of their own minds (the instrument which does science). The well-documented psychology of thinking and reasoning is of particular importance in this regard (Jonathan St B T Evans, 2008; Kahneman, Slovic, & Tversky, 1982; K. E. Stanovich, 1999). However, given the automatic nature of most cognitive biases, awareness is not sufficient because prefrontally localised executive functions (System 2) which might help to regulate these automatisms are based on limited cognitive resources which are costly in physical energetic terms, e.g., top-down regulation — glucose utilisation — ego-depletion (Baumeister, Bratslavsky, Muraven, & Tice, 1998). Therefore, we need to implement additional external systems which help to prevent such predictable fallacies. Preregistration is a systematic procedural intervention which directly antagonises unconscious biases which may distort scientific reasoning and decision-making (which in turn forms the basis of many important real-world decisions). In a publication in the Proceedings of the National Academy of Sciences, this novel trend has been termed “The preregistration revolution” (Nosek, Ebersole, DeHaven, & Mellor, 2018). Preregistration services (mainly web-based) are now becoming available for all scientific disciplines and should soon be widely adopted by the general research community.

“Progress in science relies in part on generating hypotheses with existing observations and testing hypotheses with new observations. this distinction between postdiction and prediction is appreciated conceptually but is not respected in practice. mistaking generation of postdictions with testing of predictions reduces the credibility of research findings. however, ordinary biases in human reasoning, such as hindsight bias, make it hard to avoid this mistake. an effective solution is to define the research questions and analysis plan before observing the research outcomes—a process called preregistration. preregistration distinguishes analyses and outcomes that result from predictions from those that result from postdictions. a variety of practical strategies are available to make the best possible use of preregistration in circumstances that fall short of the ideal application, such as when the data are preexisting. services are now available for preregistration across all disciplines, facilitating a rapid increase in the practice. widespread adoption of preregistration will increase distinctiveness between hypothesis generation and hypothesis testing and will improve the credibility of research findings.”